Will Your Termination Clause Hold Up? 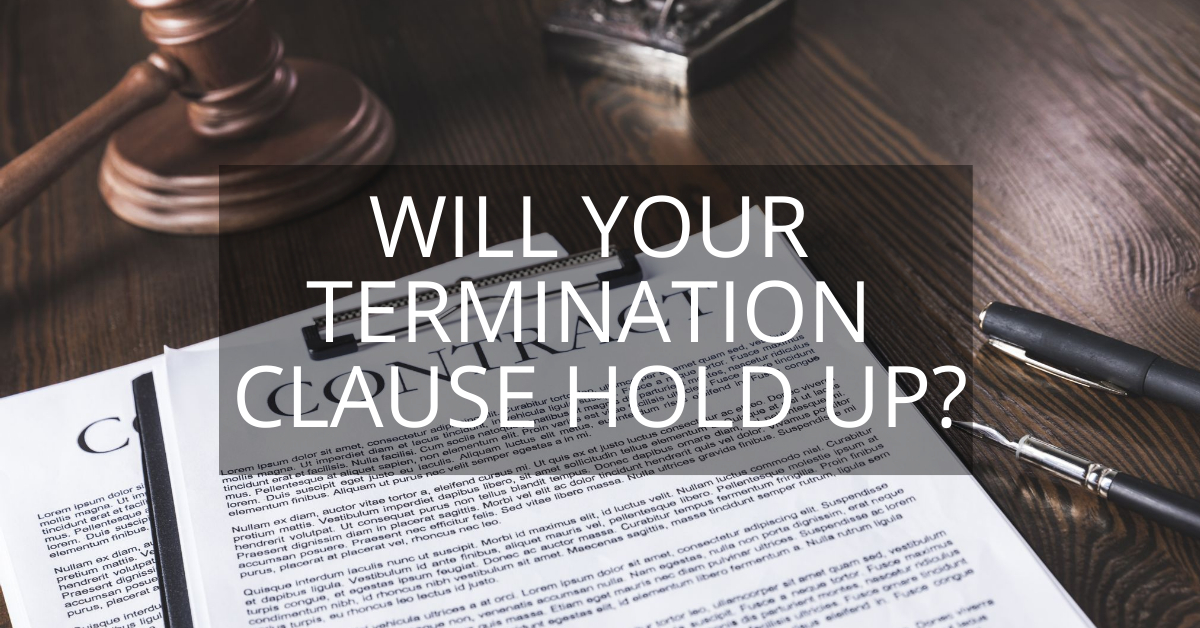 One of the hot button topics in employment law for the last several years is the enforceability of termination clauses or notice provisions in employment agreements. Such clauses attempt to limit an employee’s entitlements upon dismissal, often to the minimum standards set out in the Employment Standards Act, 2000. In recent years, the case law surrounding this topic continues to develop, particularly at the Court of Appeal.

The Court of Appeal continued to clarify the law on this topic with the addition of its decision in Rossman v. Canadian Solar Inc. In this case, the employee, Mr. Rossman, began working for Canadian Solar in May 2010 as a Regional Sales Manager after signing an employment agreement that included a termination clause. In August 2012, he accepted a project management role with the company and signed a new employment agreement with a termination clause using the same language as before.

The termination clause in both agreements stated the following:

9.01 The parties understand and agree that employment pursuant to this agreement may be terminated in the following manner in the specified circumstances:

(c) by the Employer, after the probation period, in its absolute discretion and for any reason on giving the Employee written notice for a period which is the greater of:

(i) 2 weeks, or
(ii) In accordance with the provisions of the Employment Standards Act (Ontario) or other applicable legislation,

When Mr. Rossman was dismissed without cause in February 2014, he started a wrongful dismissal action against Canadian Solar and later brought a motion for summary judgment. The judge hearing the motion concluded that Mr. Rossman was indeed wrongfully dismissed and that the termination clause was not enforceable because it attempted to contract out of the minimum standards of the Employment Standards Act, 2000 by limiting Mr. Rossman’s benefits coverage to four weeks.

Canadian Solar appealed the decision on the basis that Mr. Rossman was employed for less than four years and therefore the termination clause provided him with a greater entitlement to benefits than what the legislation prescribed (i.e., three weeks of benefits coverage). The Court of Appeal disagreed.

In doing so, the Court of Appeal highlighted the following principles:

It is presumed that an employer cannot terminate employment without reasonable notice;
To rebut this presumption, employers and employees are free to agree to any notice period, as long as the agreement meets the minimum standards set out in the Employment Standards Act, 2000;
Otherwise, the presumption is not rebutted and the employee is entitled to reasonable notice of termination;
In that case, the employee is entitled to pay in lieu of notice for the reasonable notice period under common law.
The Court of Appeal also emphasized that if any part of the termination clause conflicts with the minimum standards set out in the legislation, then it is not just the offending part that is struck out, but the entire termination clause as well.

In addition, the Court of Appeal concluded that the termination clause was also ambiguous and therefore applied an interpretation favourable to Mr. Rossman in accordance with the contra proferentem rule.

In dismissing Canadian Solar’s appeal, the Court of Appeal upheld the motion judge’s award of 5 months of pay in lieu of notice.

The takeaway from this case, particularly for employers, is that a termination clause that attempts to limit an employee’s entitlements upon dismissal without cause to the minimum standards set out in the Employment Standards Act, 2000 must be drafted with great care to ensure that no part of an employee’s remuneration package is overlooked. The risk is that the termination clause may be deemed unenforceable and the employee may be entitled to common law notice regardless. Since remuneration packages vary from employer to employer and employee to employee, a precedent termination clause is not necessarily going to be fit for its intended purpose.